President of Ukraine Petro Poroshenko is to raise the question of the deployment of Russian nuclear weapons in Crimea at a nuclear security summit in the USA. 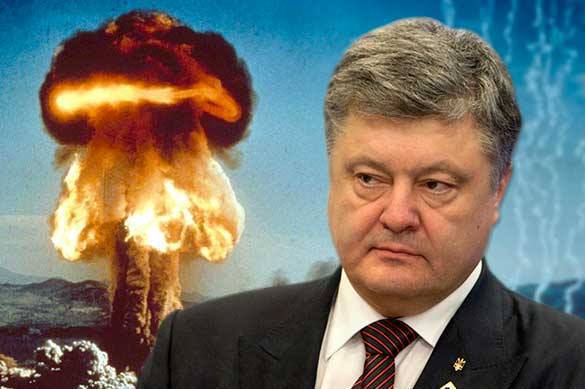 Ukrainian President Petro Poroshenko arrived in the United States on March 30. Poroshenko is visiting the United States to hold a number of meetings with US politicians and take part in the international summit for nuclear security. Poroshenko has an important agenda to give a new impetus to the negotiations between Kiev and Washington to overcome the crisis in the east of Ukraine.

According to media reports, Poroshenko's primary strategy in the United States is to warn the West about the threat from Russia. Political analyst Taras Chornovil, a former Ukrainian MP from the Party of Regions, said that during the visit Poroshenko would announce Russia's plans to deploy nuclear weapons in Crimea.

Earlier in March, the Ukrainian president said that Russian missiles capable of carrying nuclear warheads had already been delivered to Crimea. In addition, US Congressmen expressed concerns about Russia's efforts to deploy tactical nuclear weapons on the peninsula. It goes about, for example, strategic bombers Tu-22M3 and tactical systems Iskander-M, capable of firing missiles with nuclear warheads.

At the same time, the US deployed nuclear B-52 bombers in Europe. According to US officials, the bombers were deployed in Europe to defend European countries.

The Russian Foreign Ministry made an official statement about the possibility to deploy  thermonuclear weapons and tactical nuclear weapons in Crimea.

"Russia, of course, has the right to deploy, if needed, its nuclear weapons anywhere in any place on its national territory, including on the Crimean peninsula," the head of the Department of Arms Control, Mikhail Ulyanov said.