The British Army aims to work through an armoured troops shift to the Eastern Europe in case of a conflict between Russia and the NATO. 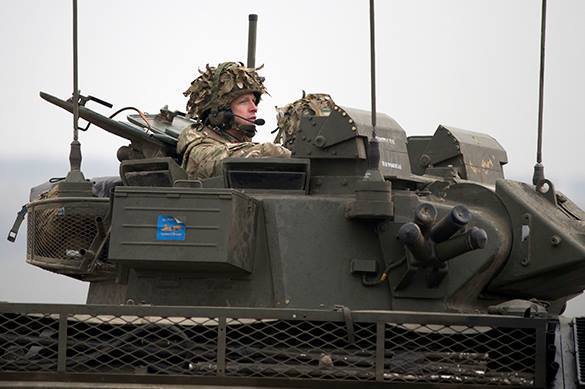 According to the Daily Telegraph, Jordan will be the terminus of this route, where 1,600 British troops and 300 military vehicles will be dispatched. The Shamal Storm exercise can be 'a dry run for one day having to send a large armoured force of British troops to Eastern Europe if there was ever a Russian confrontation with Nato'.

Moscow from its part interpreted the NATO drills as an obvious signal. 'The largest NATO Air Force exercise since the World War II are aimed to send the world an expressive signal on the Alliance peaceableness,' Aleksey Pushkov, head of the foreign-affairs committee in the State Duma, claimed in his Twitter.

Leonid Ivashov, President of the Academy of Geopolitical Problems, believes that the NATO manoeuvres are provocative ones and are carried out in order to trigger retaliatory actions of Russia. 'If talking about these NATO drills in Europe, which are the most large-scale ones after the Cold War, that is only one exercise out of a series of the US and NATO military activities this year, and it's not the last one. There will be conducted more in Ukraine. The whole complex of these exercises and activities on the military power build up evidences that the NATO and first of all the US prepares to something more serious and tries to provoke Russia,' Ivashov explained.

He also reminded that the US has already carried out joint naval exercise with Georgia on the Russian border as well as taken part in the Baltops drills in the Baltic States. According the the expert, six operative NATO bases have been already deployed to the North-West of Russia.

Despite this, the fighting prediction of the Bear Spear operation conducted by the US Strategic Command, ended up quite sadly. Its aim was to simulate a quick and partially nuclear strike against Russia. In the result, the world turned out to be in ruins, while the US was wiped off the face of the earth, as well as Russia.