The Turkish police arrested three Russian citizens on suspicion of their ties with the Islamic State terrorist group. The Russian nationals were arrested the day after the terrorist attacks in Istanbul, Pravda.Ru reports with reference to Reuters. 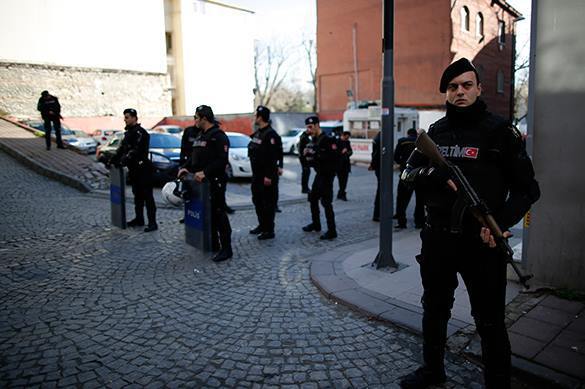 The three Russians were detained in the resort town of Antalya. Various documents and compact disks were withdrawn from the detained individuals.

On January 12, an explosion occurred on Sultanahmet Square in Istanbul. The blast killed ten people and wounded 15. Most of the victims are German tourists. The terrorist attack was conducted by a suicide bomber of the Islamic State, the Turkish police established.

In a previous terrorist attack in Turkey, more than 90 people were killed and over 200 were injured when an explosion occurred during a rally in Ankara.

Noteworthy, a Turkish guide, who was accompanying the group of foreign tourists on Sultanahmet Square in Istanbul on January 12, managed to save the lives of several German tourists.

The attack occurred when the guide was accompanying the group of 25 German tourists to Sultanahmet Square. The guide, named as Sibel, heard a click in the crowd that she found very suspicious. The woman turned around and saw an unknown young man pulling out a strange object.

"I saw that him taking out an object that looked like an explosive device. I shouted "Laufen weg" ("run away") to the German tourists, and everyone began to disperse. The next moment, the bomb blew up," the guide said.

The woman herself suffered a leg injury.