Amabo and Ednalloh speak about Russia through the looking glass

Presidents of the United States and France, Barack Obama and Francois Hollande, refused to create an anti-terrorist coalition with Russia to combat the Islamic State terrorist group. 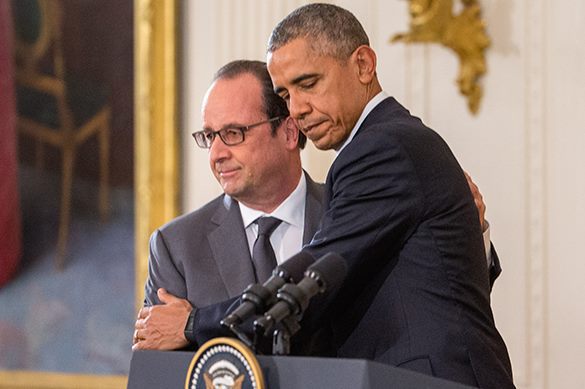 Originally, Paris pointed the need of such an association with the participation of Moscow and Washington. Chairman of Pravda.Ru Board of Directors, Vadim Gorshenin, shared his views on why the plans have changed and how it may affect the conflict in Syria.

The results of the negotiations between Hollande and Obama are not only a failure, but they are also ridiculous.

The presidents said at a joint press conference that they were not prepared to include Russia in the coalition against the Islamic State unless Russia refused to support Assad.

There is a lot to laugh about here. For example, did they ask Russia, if she wanted to join the coalition under the leadership of the United States? In addition, what is the point for Russia to take part in a failed project that had showed its meaningless before?

Russian top officials have repeatedly emphasized that Russia started fighting the Islamic State in Syria having received an official request for military assistance from the legitimately elected president of the country.

Prior to that, Russian Foreign Minister Sergei Lavrov repeatedly stated that military action on the territory of third countries could be based on either a request from the leaders of those countries and on the basis of a UN mandate.

On this basis, (everyone knows, but still), the US-led group that includes France, Britain and so on is operating in Syria illegally and in a highly inefficient manner.

In these circumstances, the two bandits from the group that attacked a sovereign state say that they are not ready to accept Russia in it, even though Russia is the only state that operates in Syria on the basis of international law.

Sounds surreal, doesn't it? It does. Abamo and Ednalloh spoke about Russia through the looking glass - the Russia that is on the other side of the mirror.