Flags of Russia, France and Lebanon appear on Giza pyramids

Images of Russian, French and Lebanese flags appeared on the surface of Giza pyramids in Egypt. The authorities of the Arab republic have this shown their solidarity with Russia, France and Lebanon in connection with recent terrorist attacks and the air crash, Pravda.Ru reports with reference to LifeNews. 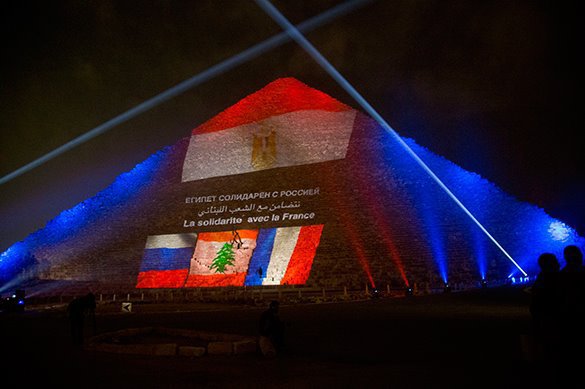 The images of the flags were accompanied with phrases of sympathy written in native language of the three countries. In addition, Egyptians lit candles at the foot of the pyramid of Cheops in memory of the victims of the tragedy.

As a result of the crash of the Airbus A321 passenger jetliner of Kogalymavia that was flying from  Sharm el Sheikh to St. Petersburg on October 31, 224 people were killed.

In Beirut, 44 people were killed in terrorist bombings, 239 more were injured. The Beirut attacks occurred on a busy street in the shopping district of Ain es Sikka.

On November 14, at least 129 people were killed as a result of several coordinated terrorist attacks in Paris. As many as 353 people were injured, nearly 100 of them remain in critical condition.

The Islamic State terrorist organization claimed responsibility for all of the above-mentioned attacks.