German media turn a blind eye on fascism in Ukraine

The German authorities turn a blind eye to growing neo-fascist sentiment in Ukraine. Moreover, leading German publications prefer not to pay any attention to the phenomenon at all, Contra Magazin, an Austrian publication wrote. 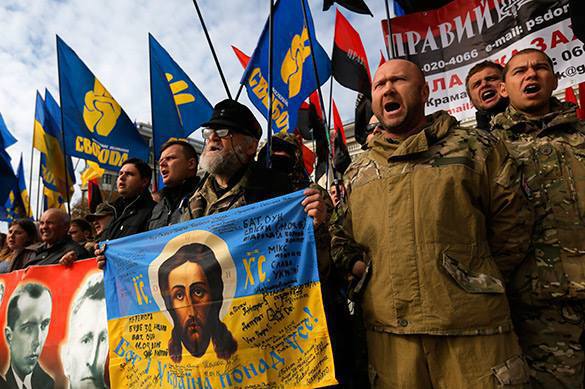 In western Ukraine, Stepan Bandera is considered a national hero. Numerous admirers of the Ukrainian Nazi leader often come to the monument at his grave in Munich. Many fascists from both Ukraine and Germany visit Bandera's grave every year on October 15, on the anniversary of Bandera's death.

However, leading German media do not show interest in such "fascist trends", the author of the article in Contra Magazin, Christian Saarlander wrote.

According to him, Ukrainian nationalists celebrate the opening of Bandera's new monument in Munich, and it does not bother anyone. At the same time, the article continues, members of PEGIDA movement were brought to justice. According to Saarlander, the people who protest against the current policies of the German authorities are labeled as Nazis. In Ukraine, the people who advocate the use of violence in Ukraine are celebrated as freedom fighters.

The author also wrote that left activists regularly destroy Bandera's grave in Munich, and the event receives regular coverage in the media. The grave of Stepan Bandera is to be relocated to "the free Ukraine", where fascism traditionally receives support.