What should US do, as Russia and China draw together

The US should realize as soon as possible what should it do under the Russian and Chinese drawing together. 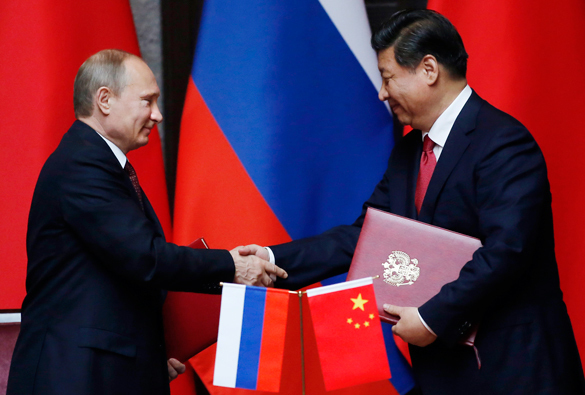 Jacob Stokes and Alexander Sullivan note in their article that some experts, as well as Joseph Nye believe this rapprochement to be ''a marriage of convenience'' based on mutual mistrust.

From the other hand, Princeton's Gilbert Rozman claimed that this partnership may become ''a feature of a new, post-Cold War geopolitical order,'' The truth is somewhere in the middle.

Authors emphasize that some aspects of Russian and Chinese cooperation threaten interests of the USA. Both countries boost the concept of ''cyber sovereignty'', that is strengthen the state control over internet activity in their territories, and thus, crush free and open internet.

Beside that, Russia's supplying China with modern S-400 surface-to-air missile system can seriously aggravate the American military planning in the Asian-Pacific region. At the same time, both countries actively assisted in the nuclear deal with Iran, and their aid will be necessary to fulfill it.

So, the Russian-Chinese cooperation is quite ambiguous for the United States. That is why they can not work out adequate political recommendations. As John Mearsheimer, international relations theorist, claimed in his latest interview ''driving the Russians into the arms of the Chinese...is strategic foolishness of the first order.''

According to his concept, the US shouldn't pressurize any of the countries individually, so that not to hasten their embrace. The US just does not have any attractive incentive to breach the Russian and Chinese partnership, experts note.

''Instead of trying to break up the two powers, the U.S. goal should be to provide the opportunities and space for China and Russia to create distance between themselves. This means not opposing-and even tacitly encouraging-each power's efforts to extend its influence in the other's backyard,'' the authors concluded.