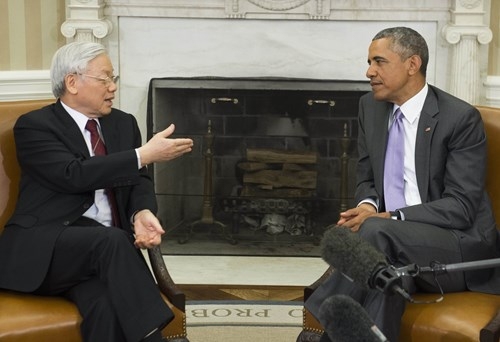 President Obama welcomed the US official visit by Party General Secretary Nguyen Phu Trong. He stressed that the US attaches special importance to its relations with Vietnam and the latter's role in the Asian-Pacific region, expressing his hope for stronger bilateral relations in the time ahead in the interest of the two countries and the region.

Party General Secretary Nguyen Phu Trong affirmed Vietnam's consistent and long-term policy of treasuring the development of relations with the US. The full implementation and continuous intensification of their comprehensive partnership in the principle of respecting each other's independence, sovereignty and political regime without interference into each other's internal affairs is the foundation to build up trust and forward bilateral ties to a new level.

Looking back the past 20 years, the two leaders rejoiced at the positive and robust development in the countries' friendship and cooperation in the spirit of putting the past behind, overcoming differences, promoting similarities, and looking towards the future. The achieved outcomes show that this orientation is in line with the two peoples' interest as well as peace, stability and prosperous development in the region and the world. The two sides shared the view that the US official visit by Party General Secretary Nguyen Phu Trong is a historic visit in the two nations' relations.

Party General Secretary Nguyen Phu Trong and President Obama exchanged opinions and agreed on major directions to foster bilateral ties and deepen and diversify the comprehensive partnership in the time to come. They put emphasis on increasing high-level exchanges and contacts, expanding consultation mechanisms between the two countries on mutually concerned issues, promoting economic-trade-investment cooperation as a cornerstone and driving force for bilateral relations, continuing to bolster scientific, educational, medical and environmental collaboration, reinforcing partnership in defence and security, including the effective implementation of the Joint Vision Statement on Defence Relations.

The two leaders also concurred on enhancing people-to-people exchange and cooperation in humanitarian activities and settling consequences left from war, while continuing to cooperate in an extensive and result-oriented manner at multilateral mechanisms and forums so as to actively contribute to global peace, security, stability and sustainable development, including cooperation on anti-terrorism, cyber security, and coping with epidemics and climate change.

They also hailed positive progress attained during negotiations on the Trans-Pacific Partnership (TPP) agreement and underlined the importance of this pact to regional development along with its major contributions to global growth and stability. They held that the TPP, with high criteria, needs to take into account the developmental level of negotiating members and respect their political and cultural differences, creating a new and critical momentum for fostering cooperation between the US and the Asian-Pacific region.

The two sides also exchanged opinions on regional and international issues of mutual concerns. They agreed that the maintenance of peace, stability, security, safety and freedom of navigation and aviation in the East Sea is the common interest and responsibility of the regional and international community. They both expressed support of the principle of resolving disputes via peaceful means on the basis of respect for international law, including the 1982 UN Convention on the Law of the Sea (UNCLOS), implementing strictly and fully the Declaration on the Conduct of Parties in the East Sea (DOC), and working towards the early conclusion of a Code of Conduct on the East Sea (COC), without using or threatening to use force and making acts to further complicate the situation in the East Sea.

Regarding the US-ASEAN relations, Party General Secretary Nguyen Phu Trong said Vietnam supports the elevation of the US-ASEAN ties to Strategic Partnership and vows to work with the US and other countries to promote the central role of ASEAN and ensure the efficiency of such forums as the ASEAN Regional Forum (ARF), the ASEAN Defense Ministers' Meeting Plus (ADMM+), the Asia-Pacific Economic Cooperation (APEC) forum and the East Asia Summit (EAS) in maintaining peace and security as well as in dealing with political and economic issues in the region. He added that he hopes the US will continue to support and coordinate with Vietnam for the successful organisation of the APEC Summit in Vietnam in 2017.

He said the two leaders discussed how to deepen relations in the frame work of the comprehensive partnership. They also talked about the Trans-Pacific Partnership with the aim of raising labour and environmental standards, bringing prosperity and more jobs for the people. They shared opinion on the settlement of disputes by peaceful measures on the basis of international law, ensuring trade in the region and the prosperity of nations; on increasing exchanges between the two peoples and other important global issues.

Party General Secretary Nguyen Phu Trong said the two leaders had a constructive, straightforward and sincere talk. From two former enemies, Vietnam and the US have become friends and then comprehensive partners, he said, affirming that the relations will further grow in the future, thanks to the strategic vision and the efforts of leaders of both countries and the support of the people, because the relations suit the people's interest and the current development trend of peace, friendship, cooperation and development.