Greeks to say 'no' to Europe at referendum - expert

Greek President Prokopis Pavlopoulos announced a national referendum about creditors' proposals. The referendum is to take place on July 5. European officials have already condemned this decision. European Commissioner Guenther Oettinger told German publication Handelsblatt that the decision about the referendum was unfriendly. Is there a cold war brewing between the European Union and Greece? 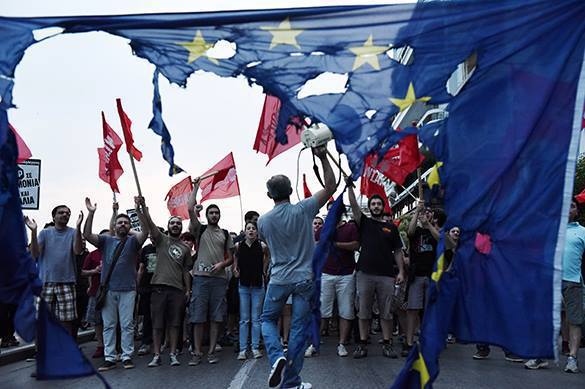 Pravda.Ru asked this question to Drector of the Greek Cultural Center, Theodora Giannitsi.

"This is a natural result of the impasse process of negotiations - the period that lasts for five years. This is maybe the time, when it is peoples that stand responsible for their actions, for their leaders' actions, as well as for the future of the so-called Europe," she told Pravda.Ru.

We asked the expert what would be the results of the negotiations. The Greek people are tired, she replied. The expert believes tat the Greek people will say no to the conditions that the European Union has been imposing on Greece for the last five years.

"I think that depending on the scenario, the Greek government will have to consider the future. Obviously, the Greek government understands that this is not the only way, that there are other countries and other markets - the Russian, Asian and Latin American market. Russia was in the same situation a year ago, when it introduced retaliatory sanctions against the EU," the expert said.

"Many fear that this is the end. Yet, it could be a new beginning. In 1821, the hungry Greeks took up arms and stood up against the Ottoman yoke. They could not foresee then that in just nine years, they will get independence. It's not just the political elite, but also people, who make history," the expert concluded.