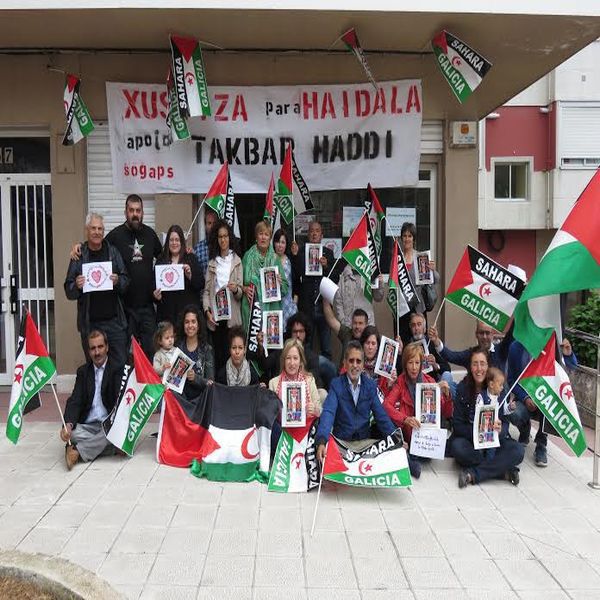 At 10:00 am of June 13 more than two dozen people began in Vigo (Pontevedra) Spain a 24-hour hunger strike in solidarity and support with Tekbar Haddi, Saharawi mother on hunger strike since 15 May in Las Palmas.

Tekbar Haddi is on hunger strike demanding the body of her son Haidala, (Saharawi activist of the peaceful intifada) who died as a result of an attack by Moroccan settlers in the occupied territories of Western Sahara, followed by detention and torture by the Moroccan occupying forces and serious medical negligence. Haidala was 21 years old.

This protest is part of various solidarity actions that will be carried out until Tekbar recovers the body of her son, and can give him a dignifying funeral. The group on hunger strike has issued a statement in which they denounce the serious violations of basic human rights in the occupied territories of Western Sahara by the Moroccan illegal occupation regime that remains unpunished.

The Galician activists were at the beginning of the strike in contact via Skype with Tekbar and the movement that supports her in the Canary Islands, they could verify the frail health of Tekbar who completes today 30-days of hunger strike, but she remains firm in her intention to pursue the strike until she recovers the body of her son. They end their statement saluting all those who support Tekbar Haddi and this solidarity action and reaffirm their solidarity with the Polisario Front and the struggle for independence of the last colony in Africa.