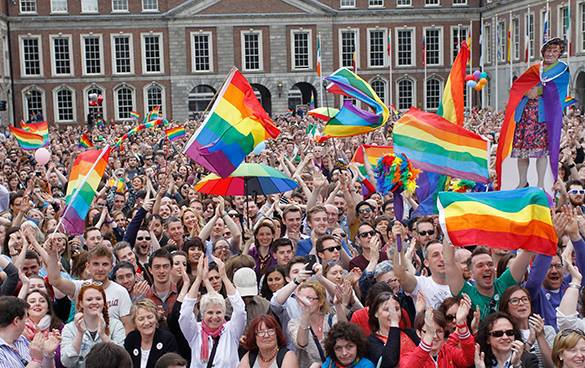 1.2 million people voted in favour of gay marriage against those 750,000 citizens opposing it.

Now, corresponding amendments should be made in the Constitution, as homosexuality was regarded a crime until 1993.

"With today's vote, we have disclosed who we are: a generous, compassionate, bold and joyful people," Prime Minister Enda Kenny proclaimed as he welcomed the outcome. Beside him, Deputy Prime Minister Joan Burton declared the victory "a magical moving moment, when the world's beating heart is in Ireland".

The UK Prime Minister David Cameron also congratulated the people of Ireland in his twitter on the voting for same-sex marriage, as that "making clear they are equal".

Dublin Archbishop Diarmuid Martin though said the referendum meant that the Church in Ireland needed to reconnect with young people.

"We have to stop and have a reality check, not move into denial of the realities. I think it is a social revolution. The church needs to do a reality check right across the board. Have we drifted completely away from young people? I ask myself. Most of these young people who voted yes are products of our Catholic school system for 12 years. I'm saying there's a big challenge there to see how we get across the message of the Church," he added.