El Aaiun under tight police siege. The city of El Aaiun is under siege, enhanced police and auxiliary forces are patrolling the main streets and neighbourhoods preventing any attempt to rally. 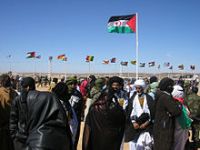 On 20 May at 15:00, the 20 year old human rights activist Lemjeyid Lili, was kidnapped and blindfolded by police in plain clothes and taken in a Toyota Prado outside the city near the river, where he was brutally beaten.

Afterwards the police took him to the Police Headquarters of El Aaiun where he continued to be beaten and interrogated, he was released at the end of the day.

According to Lili's testimony and other eyewitnesses the agents who kidnapped him are from the "Saaid" group, a group of policemen in civilian clothes known for their brutal methods. Sidi Ahmed Alwat, president of the Saharawi Association for Disabled People was prevented by police from leaving his home, where he was with a group of friends.

The house was surrounded preventing the activist known to leave and participate in any demonstration. Most houses of Saharawi activists and members of human rights associations are under constant surveillance.