Western Sahara: One dead and several injured in landmine explosion

A Saharawi citizen, Amheiyiba Mohamed Saleh, tragically lost her life when the landrover in which she was travelling with her husband and two children hit a landmine. Her son Sahel Ali suffered serious injuries to his head, face and ribs. He and his father, Ali Hussein, who also sustained injuries, were both taken to a hospital in El Aaiun. The daughter Làl-la Ali was taken to a hospital in Smara. 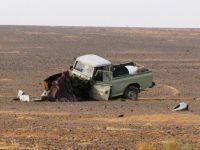 The incident occurred in the Skaikima area of the city of Smara in central Western Sahara, an area where clashes between the Saharawi and Moroccan armies had taken place during the 1970s. According to family members, the family had been on their way back to the city from the place where they keep their animals.

During the armed conflict, Morocco used landmines to defend themselves against attacks from the Polisario Front (the movement of the liberation of Western Sahara), and landmines continue to contaminate both sides of the 2,700km wall which divides Western Sahara, presenting a grave danger, particularly for the local nomadic population. Each year, a number of (usually civilian) deaths are caused by these landmines in Western Sahara.

Despite the efforts of international organisations, and treaties signed in other countries, Morocco has so far not shown any interest in removing landmines in Western Sahara. Adala UK asks the Moroccan government to urgently support measures to remove landmines from the Occupied Territories, as these represent a constant threat to the lives of innocent civilians.