USA lives in world supremacy illusion that breaks against reality 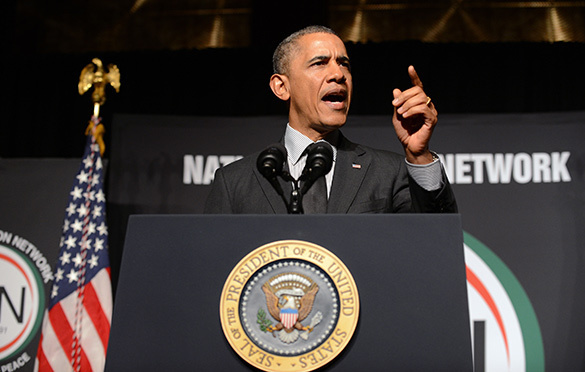 In his recent speech to the Congress, US President Barack Obama declared that Russia's economy was "in tatters" and the country was isolated owing to US efforts. Alexei Mukhin, CEO of the Political Information Centre, agreed to comment on the US President's speech in an interview with Pravda.Ru.

"In Angela Merkel's terms, Barack Obama lost touch with reality long ago and lives in his own world. The US sanctions pressure only allowed Russia to diversify its foreign trade contracts and shift priorities. In the meanwhile, the ruble is gradually breaking off the dollar as well as the oil price, that's what was actually achieved. This is what Barack Obama seems to have meant when he was talking about tatters," Alexei Mukhin said.

Obama also mentioned the situation with Iran, where diplomatic efforts helped freeze the nuclear programme. The US President hopes to make a compromise with Teheran before this spring. A Pravda.Ru correspondent asked Alexei Mukhin whether Obama's hopes would come true.

The expert cast doubt on that idea. "If the USA continue their aggression in foreign affairs, they will have nothing to discuss. Obama gave himself the credit for the normalization of relations with Kuba. In fact, their relations did not improve. Critics' declarations are good, but it takes time for the society of the country to change its attitude. Direct political actions are needed to implement such declarations. It's not the case, which shows again that Barack Obama is a man detached from reality."

Like in his previous speeches, Obama observed that the USA should combine their military potential with diplomacy, "wisely use our power" and set a "value example." "That's what makes us exceptional," the US President stated. Pravda.Ru asked the expert to comment upon this statement.

"I think the United States will punish themselves. The point is that they regard themselves as the winners in the cold war, they attributed this victory to themselves and want the others to behave like losers. It's an illusion that makes them weak. Countries demonstrate their sovereignty, especially Russia. And this reality contradicts to Washington's illusory reality," Alexei Mukhin concluded.