A symbol of the USSR, a red star, has been removed from the spire of the building of the Verkhovna Rada of Ukraine, vice-speaker of the Rada Ruslan Koshulinsky said.

"The Soviet star was cut off with the consent of the parliamentary leadership," he said. 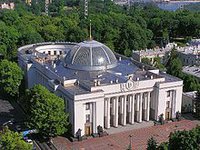 In late 2013, deputy from Fatherland Party, Alexander Briginets, addressed to then-Chairman of the parliament Vladimir Rybak with a request to remove the Soviet star from the spire on the building of the Verkhovna Rada. However, the leadership of the Parliament stated that the star could be removed only with the consent of adequate instances.

Meanwhile, the parliament plans to consider a draft resolution on Ukraine's address to the International Criminal Court on the facts of crimes against humanity during mass protests in the country. The agenda also includes a draft resolution empowering Acting President of Ukraine and Verkhovna Rada Chairman to sign laws.