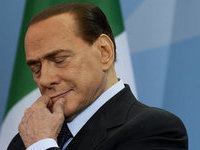 Former Italian Prime Minister Silvio Berlusconi said that he was not afraid of arrest, as in this case his political clout in the Apennines would only increase.

In an interview with a French radio station, Berlusconi said that his passport had been withdrawn from him. His phone could be tapped, he added.

"They can arrest me when they want, but I'm not afraid. If they do it, a revolution will occur in Italy," he said.

Berlusconi believes that if he is sent to jail, he will immediately gain support of the majority of Italians at the next election.

The politician said that he would take efforts early parliamentary elections be held simultaneously with the elections to the European Parliament that are to take place on May 24th. He suggests that his campaign will attract at least 24 million Italians.

At the end of November this year, Berlusconi was expelled from the Senate on the basis of the law prohibiting any election run to those convicted to terms over two years. The 77-year-old politician acts as a defendant on several criminal cases.