17:34
Azovstal militants reveal how many days they can hold out
16:47
Russia and Ukraine reach agreement to evacuate wounded from Azovstal
16:12
Expert says why Kyiv was interested in nuclear weapon before Russian operation started
15:33
Putin at CSTO summit: Russia does not have any issues with Sweden or Finland
14:47
Renault Russia to start producing Moskvich cars
13:27
McDonald's decides to leave the Russian market completely, but then comes back
13:18
Bilateral trade between Russia and Finland collapses
Author`s name Pravda.Ru 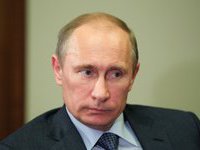 Former US spy agency contractor Edward Snowden has applied for temporary asylum in Russia after three weeks holed up at a Moscow airport trying to avoid prosecution in the United States, reports ITV News.

On Monday,Russian President Vladimir Putin indirectly addressed Edward Snowden's renewed request for political asylum in Russia, noting that the former National Security Agency contractor appears to be "trapped" in Russia. But, he added, he and Mr. Snowden are in agreement about about one important matter: he really shouldn't stay in Russia any longer than he needs to, says Christian Science Monitor.