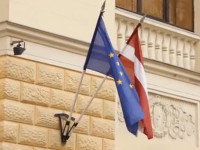 The Latvian Parliament on Thursday approved the ban on the use and distribution of symbolism of the USSR and Nazi Germany.

Previously, this rule as in effect only during marches, pickets and rallies. From now on, flags, emblems, anthems and symbols of the former USSR, Latvian SSR and Nazi Germany, as well as uniforms, Nazi swastikas, SS symbols and the signs of the Soviet hammer and sickle and the five-pointed star have been banned in Latvia permanently.

The ban will come into force as soon as it is approved by the President. In neighboring Lithuania, Soviet symbols were banned a few years ago.