Chinese authorities have blocked all programs and services that allow users to visit prohibited sites, such as Twitter, Facebook and YouTube, The New York Times reports. 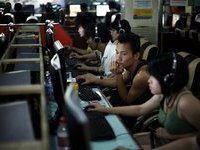 In a short time, the three companies said that their websites were blocked in China. Chinese authorities advised all companies that are interested in conducting their business in China should use private networks for the transmission of information from the country.

Some foreign media experts say that should the situation continue, all news agencies and offices that transmit news from Asia, will be forced to move from Beijing to Tokyo.

China uses strict Internet censorship. All web sites are scanned for keywords that are associated with information about state security. The country also filters websites through special black lists. The government blocks access to the portals, which, as Chinese officials believe, spread forbidden information and promote violence and pornography.

Each video in the country can be published online only after moderation.

In 2010, the Chinese, being the largest group of Internet users on the planet, lost access to the largest search engine Google.

Beijing says that strict measures to restrict access to the Internet will help to protect the mental health of the younger generation.