Syrian President, Bashar al-Asad, gave a speech on Sunday in connection with the opening of the new Syrian Parliament. Al-Asad honored the memory of "all the martyrs" in Syria, whether civilian or military, who lost their lives during the riots by the armed terrorist groups opposed to the Syrian government since March 2011, and argued that their blood is not shed in vain. 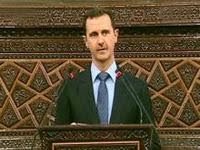 During the speech, broadcast live on television, the Syrian president denounced the foreign interference that is occurring in Syria calling it a "plan of destruction" and "international conspiracy" which attempts only to destabilize the country.

He stressed that his government seeks all political means, and despite all these efforts, they were in vain, "because I had to face a real war being waged from abroad."

He also asked to distinguish between truth and falsehood, between politics and terrorism in order to resolve the crisis sweeping the country showing that the acts of violence have increased, while continuing the political process.

In a speech to the newly formed Parliament of Syria, Al-Assad stressed that Syria faces an international conspiracy.  It is necessary to separate between terrorism and politics, which is an important issue in reaching a solution to the crisis.

"The crisis forces us to forget everything in order to save the nation (...), Syria is independent and does not have to take orders from abroad," he added.

The Syrian president said that in his judgment those who encourage and practice terrorism are not interested in dialogue or reform.

Referring to the operation of armed opposition groups in the Arab country, he affirmed that "they are in charge of a mission and will not stop until they meet their objectives or until we manage to stop them."

"Syria is open to all Syrians, whatever their opinions, but terrorism cannot be part of the political process and our struggle is against terrorism to save the nation. We will continue fighting terrorism," he added.

Elsewhere in his speech, he described the main perpetrators of the Hula massacre as barbaric and inhuman and expressed his deep regret for the macabre incident, offering his condolences to the families of victims who lost their lives in Hula.