Gen. John Allen takes control of the war in Afghanistan 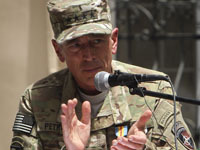 A new U.S. commander, Gen. John Allen, formally took control of the war in Afghanistan on Monday, inheriting a nearly decade-long conflict that has cost the lives of at least 1,667 American troops.

Allen succeeds Gen. David H. Petraeus, who is leaving to head the CIA. Petraeus had been in command for only a year, hastily taking the helm after President Obama fired Gen. Stanley McChrystal after Rolling Stone magazine reported intemperate comments by his staff about the administration's civilian leadership, informs Los Angeles Times.

Petraeus ends his tour in Afghanistan without conclusive signs that the counter-insurgency strategy he helped design has turned the tide in the war against the Taliban. The more than 140,000 NATO troops under his command have weakened the insurgency in some of its key strongholds in the south, but other parts of the country remain treacherous, and Taliban leaders still operate with relative impunity from Pakistan.

On Monday morning, three NATO troops were killed in a bombing in eastern Afghanistan. And the Taliban claimed responsibility for killing a senior adviser to Afghan President Hamid Karzai and a member of parliament in Kabul on Sunday night, says Washington Post.

Now, the assassination of Ahmed Wali Karzai by a close family friend highlights what may be an even greater threat to the government than the one posed by the Taliban and their foreign supporters.

While the international community has spent billions on training and equipping more than 200,000 security personnel, much of that money has been siphoned off by senior officials who have steadily enriched themselves.

Among them was Ahmed Wali Karzai, 50, who in addition to having been on the CIA's payroll is said to have muscled his way into the country's multi-billion dollar opium trade, an accusation he has denied. But there is no denying that he controlled lucrative security contracts throughout the southern province of Kandahar, which he governed as his personal fiefdom, according to Sacramento Bee.