Floods and landslides prompt evacuation of 4,000 in eastern Philippines 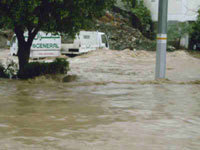 An 80-year-old woman has died and her son is missing after they were swept away by floodwaters in eastern Philippines, where landslides and flooding have prompted some 4,000 people to evacuate to safer ground, officials say.

Albay province has been pummeled by nonstop rains for five days, and the provincial governor, Joey Salceda, has declared a state of calamity to free up provincial funds for disaster relief efforts, Washington Post reports.

The Philippine Atmospheric, Geophysical and Astronomical Services Administration (PAGASA) said rains over Albay and nearby provinces are caused by the tail end of a cold front.

Salceda proposed to name the weather disturbance affecting Bicol region. He also urged PAGASA to issue some sort of a "storm signal warning" to alert the residents.

"Ito ay typhoon without wind," he said, adding that cold fronts and similar mild weather systems are very treacherous and "major hazards on the ground," according to ABS CBN News.