First Stage of Presidential Vote in Germany Shows No Winner

Germany 's Chancellor Angela Merkel Wednesday suffered a blow when the first round of the presidential vote in the country's national assembly ended with no clear winner. A second round of the vote will take place later Wednesday. 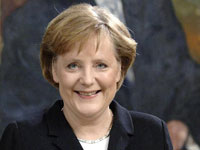 First Stage of Presidential Vote in Germany Shows No Winner

Ms. Merkel's candidate, Christian Wulff, secured most votes but he was short of an absolute majority in the 1,244-seat assembly, where the center-right parties have a majority of 21, holding 644 seats, Wall Street Journal reports.

Merkel's center-right coalition has struggled since taking office in October. It has been hit by constant squabbling over policy and the eurozone debt crisis forced it to push through an austerity drive and unpopular rescue packages for Germany's European partners.

The contest for the presidency, a largely ceremonial but symbolically important job, has added another layer to its troubles - fueling speculation in recent weeks that a loss for Merkel's candidate could push her coalition to the brink of collapse, Maximum Edge reports.