The Philippine Congress proclaimed Benigno Aquino III as the country's next president on Wednesday. 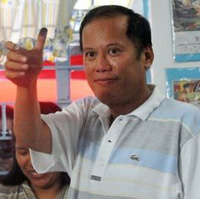 Aquino garnered more than 15 million votes in the May election -- about 5.7 million ahead of one-time president Joseph Estrada, the closest contender, CNN reports.

A joint Senate and House of Representatives session voted Wednesday to formalize Aquino's landslide victory in the country's first national automated elections last month. The son of the country's revered democracy icons campaigned on a pledge to target corruption and eliminate poverty.

Aquino will take his oath of office on June 30 to succeed Gloria Macapagal Arroyo, whose nine-year rule has been wracked by four coup attempts and opposition impeachment bids over allegations of election fraud, corruption and human rights abuses, The Associated Press says.