Former President Bill Clinton underwent a procedure known as angioplasty, which involved surgeons placing two stents in one of his coronary arteries. Clinton was hospitalized Thursday at New York Presbyterian Hospital in Manhattan after experiencing discomfort in his chest. 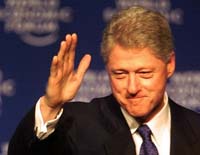 Angioplasty is done on more than 1 million people a year in the United States.

Compared to a bypass procedure, some advantages of angioplasty are that it doesn't require an incision or general anesthesia, and usually offers a shorter recovery time, the National Institutes of Health said on its Website.

“Angioplasty involves the introduction of a catheter into the heart through the femoral artery in the groin,” Dr. Isadore Rosenfeld, professor of medicine, renowned cardiologist told reporters “They make an incision and thread the catheter up to the heart. While the catheter is still in place, they thread a balloon up into it that pushes the clot to the side of the artery, and then you remove the balloon and put in a stent to keep the clot from coming back.”

Stents are small, mesh tubes that help support the inner walls of the artery. Some are coated with medications that are continuously released into the artery to help prevent a blockage from forming.

“Risks are minimal, and normally with the stenting procedure, the patient can go home the next day,” Rosenfeld said. “There may be a problem where they inserted the catheter in the groin, there could be a bleed, or sometimes on a rare occasion, the artery that they opened up closes up again, but it’s not very common.”

Clinton is no stranger to heart problems. In 2004, the 63-year-old, known for his love of fast food, underwent a successful quadruple bypass operation to free four blocked arteries.

Even though the surgery in 2004 was a success, Rosenfeld said it’s not uncommon for people who’ve had bypass surgery to need another procedure down the road.

The former president has been working in recent weeks to help relief efforts in Haiti. Since leaving office, he has maintained a busy schedule working on humanitarian projects through his foundation.

FoxNews.com. has contributed to the report.