A new survey shows that African-Americans' assessment of progress and race relations in America has improved more dramatically than at any time in the last quarter century.  And, President Barack Obama's move into the White House appears to be the spark that ignited this rise in optimism and hope. 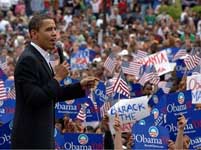 A new survey by the Pew Research Center shows that nearly twice as many African-Americans now than in 2007 say the situation of black people in the United States has improved over the last five years. This jump in optimism is the highest seen since 1984.  A majority of African-Americans also say that Mr. Obama's presidential win has improved race relations in America.

But the National Association for the Advancement of Colored People's Chairman Julian Bond says it was one moment in a long chain of events.

The inauguration of Barack Obama at the steps of the Capitol was more than just a beginning to a new presidency.  For many African-Americans, Mr. Obama was a living example of the endless possibilities. Young generation of americans dosn't regard female presidency as something impossible anymore.

The economy and the ongoing wars are tough problems the Afro-American president Obama needs to tackle.

Mr. Obama is trying a more hands-on approach to help address these problems and will present his plans later this month in his State of the Union address.