Barack Obama Is Back Home after Climate Talks' Final 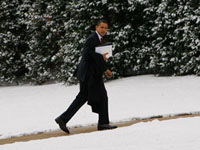 Barack Obama Is Back Home after Climate Talks' Final

Capping a whirlwind of shuttle diplomacy, Obama earlier said an "unprecedented breakthrough" had been reached among day-long meetings involving about two dozen presidents and prime ministers gathered in Copenhagen.

He admitted the so-called Copenhagen Accord -- a non-binding agreement -- did not go far enough, but characterized its provisions as "meaningful," arguing they provided a tool for ratcheting up action on greenhouse gases.

Although the deal set a goal to limit global warming to 3.6 degrees Fahrenheit (two degrees Celsius) and provided a monitoring regime, it listed no date for a binding international treaty or global targets to slash greenhouse gas emissions.

And hours after Obama and other key leaders flew home, delegates from 194 nations gathered to approve the text and met a raucous response from several developing states that resented not being part of the closed-door discussions.