Senate Democrats have reached a tentative deal on the divisive issue of abortion. Senators rejected an amendment that would have imposed stricter guidelines for the procedure. 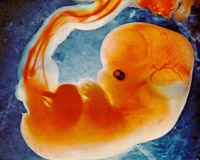 "We have a broad agreement," Reid said, emerging from a late meeting Tuesday with other Democrats. "For us, it moves this bill way down the road."

Reid declined to offer details, but vowed that "insurance companies will have more competition and the American people will have more choices." He said the public option had not been stripped out of the health care bill.

Shortly after Reid's announcement, however, one Democrat said he is concerned about the new approach. "While I appreciate the willingness of all parties to engage in good-faith discussions, I do not support proposals that would replace the public option in the bill with a purely private approach," said Sen. Russ Feingold, D-Wis.

Though little information was available Tuesday night, Sen. Charles Schumer of New York and other Democrats have said this week that lawmakers were considering a package of ideas, including an expansion of Medicaid and letting people under 65 buy into the Medicare program.

Lawmakers have also been discussing letting private insurance companies sell national health policies that would be regulated by the Office of Personnel Management, the agency that oversees health plans offered to federal workers.

Schumer has led a group of 10 Democratic senators — five liberals and five centrists — that have been privately discussing the public option.

The House approved a bill last month that includes a public option.

Sen. Ben Nelson, D-Neb., who has been among the most vocal critics of the health care legislation crafted by Reid, could not be reached for comment. Earlier Tuesday, he expressed disappointment that the Senate rejected his abortion amendment.