According to International security forces in Afghanistan, recent attacks in the country's south and east have killed four U.S. and eight Afghan soldiers. 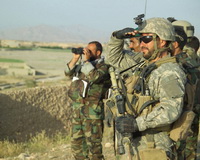 A NATO statement said a bomb Monday killed one U.S. soldier in eastern Afghanistan. On Sunday, three U.S. troops died in gun and bomb attacks in the south.

Meanwhile, U.S. officials have agreed to hand out nearly $39 million in development aid for Afghan provinces that showed a reduction in poppy cultivation in the past year, Voice of America reports.

In the meantime, President Barack Obama added a Monday night meeting with top advisers on Afghanistan to his schedule as he closes in on a decision on whether to send more U.S. troops.

Previous meetings on Afghanistan have been during normal business hours instead of at night. Obama had a crowded schedule Monday and he is hosting Indian Prime Minister Manmohan Singh Tuesday.

Obama is said to be nearing a decision on whether to add as many as 40,000 troops to the eight-year-old war. With the U.S. capital shutting down for the Thanksgiving holiday this week, Obama is not expected to announce his plans until next week at the earliest, The New York Times reports.

It was also repiorted, the high option calls for 40,000 additional troops, which was outlined by Stanley McChrystal, the top U.S. and NATO commander in Afghanistan.

Should Obama decide to send 40,000 additional troops, the military would have enormous flexibility to deploy as many as 15,000 forces to the Taliban center of gravity in the south, 5,000 to the critical eastern border with Pakistan and 10,000 as trainers for the Afghan security forces, analysts said.

The rest could be deployed across the country, including to the NATO headquarters in Kabul, the capital, and in clandestine operations.

If the president limited any additional American troops to 10,000 to 15,000, the military would deploy them largely as trainers, with some reinforcements likely in the southern province of Kandahar, the Taliban's "spiritual home".

It would focus on eliminating al-Qaida leadership in Pakistan through drone attacks.

Under the middle option, there might be 5,000 trainers rather than 10,000, and fewer troops to spread across the country, although there would still be a concentration in the south, Xinhua reports.