President Barack Obama said Sunday the United States and the Russian Federation would have a replacement treaty on reducing nuclear arms ready for approval by year's end. 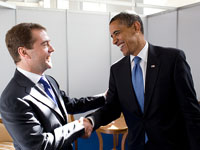 Nearing the end of his two days in Singapore, Obama has also attended a second summit with leaders of the 10 southeast Asian countries that make up the ASEAN group.

Obama and Russian President Dmitry Medvedev met on the sidelines of the Asia-Pacific summit of APEC nations to announced good progress in negotiations on an updated pact to replace the START nuclear arms agreement that expires on Dec. 5.

Sitting, gesturing and leaning toward his Russian counterpart, Obama said the pair discussed a successor to the 1991 Strategic Arms Reduction Treaty and described "excellent progress over the last several months."

"I'm confident that if we work hard and with a sense of urgency, we'll be able to get that done," Obama said, adding technical issues remain.

Medvedev said he hoped negotiators would "finalize the text of the document by December."

Obama and Medvedev agreed in April to reach a new nuclear arms reduction pact to replace and expand upon the one that was signed by former President George H.W. Bush and Soviet leader Michael Gorbachev.

During a July summit in Moscow, Obama and Medvedev further agreed to cut the number of nuclear warheads each nation possesses to between 1,500 and 1,675 within seven years.

U.S. officials say the two nations now have agreed on the broad outlines of a new treaty, which could be signed during Obama's travels to Europe in early December to accept the Nobel Peace Prize.

During his Asia trip, Obama also pushed for continued pressure on Iran and its nuclear program. Appearing with Medvedev, Obama said "we are now running out of time."

"Unfortunately, so far it appears Iran has been unable to say yes," to the proposal on uranium reprocessing, Obama said.

Medvedev continued: "We are prepared to work further and I hope our joint work will reach a positive result. In case we fail, other options remain on the table." He has said further sanctions against Iran were possible if it did not open its nuclear program to inspections to prove it was not trying to build a bomb.

The five permanent members of the U.N. Security Council — the U.S., Britain, France, Russia and China — along with Germany have engaged Iran on its nuclear program, most recently with a deal for it to ship enriched uranium to Russia for further processing as fuel for an aging reactor used for medical treatments.

The United States and its allies believe Iran is using it's nuclear program as a cover for building a bomb. Tehran says it only wants to build nuclear reactors to generate electricity.