Increased H1N1 Activity Is Expected in Northern Hemisphere During Winter

The World Health Organisation (WHO) said on Thursday, the H1N1 swine flu virus is supposed to cause more serious infections and deaths in the northern hemisphere as cold weather sets in. 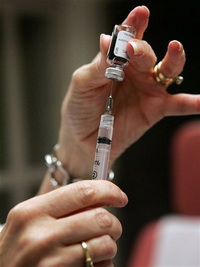 Increased H1N1 Activity Is Expected in Northern Hemisphere During Winter

But the virus is not known to have mutated, including in people infected in a large outbreak in Ukraine, meaning that antivirals continue to provide effective treatment, it said.

Mexico is reporting more H1N1 cases than early in the pandemic, which began in April, and the United States shows higher levels of flu-like illness than in past years, top WHO flu expert Keiji Fukuda said. Swine flu is also on the rise in Europe and Central Asia.

"We anticipate seeing continued or increased activity during the winter period in the northern hemisphere. This also means that we expect to see continued reports of serious cases and deaths," Fukuda told a news conference. "At WHO we remain quite concerned about the pattern that we are seeing," Reuters reports.

Meanwhile, States and counties will be struggling to vaccinate people against the swine flu pandemic well into December and January -- long after the first peak of the virus in the United States, officials said on Wednesday.

U.S. federal health officials also said it will be years before things get any better, despite years of planning.

"It is likely that the current wave of infections will peak, crest and then decline before full vaccine supplies are delivered," Dr. Thomas Frieden, director of the U.S. Centers for Disease Control and Prevention, told a House of Representatives Appropriations subcommittee.

"Our school-based vaccination efforts have now been delayed until late November or early December," Dr. Donald Williamson of the Alabama Department of Public Health told the briefing -- not a formal Congressional hearing, Reuters reports.

In the meantiem, it was reported, the Northeast Colorado Health Department has scheduled a walk-in vaccination clinic for Saturday, Nov. 14, at its headquarters at 700 Columbine St. in Sterling from 10 a.m. to 3 p.m. or until the vaccine runs out, department spokeswoman Deanna Herbert said.

“Since we have received less vaccine than anticipated, this is the first opportunity we’ve had to open a large clinic,” said John Crosthwait, NHCD district public health administrator. “We have plans to hold similar clinics in Morgan and Washington counties later this month, but the availability of vaccine, which changes on a weekly basis, will play a major role in our ability to do so.”

Herbert said NCHD has scheduled a walk-in clinic in Morgan County on Nov. 21, but it is hard to say if enough vaccine will be on hand for that, Fort Morgan Times reports.