Asian Leaders Are Under Reliable Protection

Over 36,000 military and police will provide security for Asian leaders arriving at a new summit. 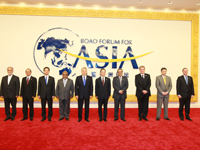 Asian Leaders Are Under Reliable Protection

The government is still smarting from the storming of the East Asian Summit in April in the seaside city of Pattaya, where anti-government protesters charged through thin police ranks and forced the evacuation of several leaders by helicopter and boat.

A main protest organizer said no new demonstrations are planned this week.

Leaders of 16 Asian and Pacific nations, including Thai Prime Minister Abhisit Vejjajiva, will gather Friday for an annual conference of the Association of Southeast Asian Nations in Cha-am, a beach resort 200 kilometers (120 miles) south of Bangkok.

About half of the security forces mobilized have thrown a security cordon around this summit venue, and the others will be on alert in the Thai capital, 20 newly bought bulletproof SUV's will chauffeur leaders to their meetings.

"Security forces have also set up emergency escape routes by land, air and sea," according to the officials. "We don't expect it to be necessary but we want to be ready and to assure leaders that they will be able to meet without distraction."

Security forces have also been empowered to impose curfews and restrict freedom of movement around Cha-am and Bangkok.

Thailand has been rocked by years of protests and counterprotests by supporters and opponents of former Prime Minister Thaksin Shinawatra, who was ousted in a 2006 military coup on accusations of corruption, abuse of power and disrespect to the country's monarch.

Nearly 10,000 demonstrators took to Bangkok's streets last Saturday, demanding a pardon for Thaksin and that he be allowed to return from exile.

The three-day conference includes the annual gathering of the 10-member ASEAN leaders and those of China, Japan, South Korea, India, Australia and New Zealand.

ASEAN is due to unveil a human rights body for Southeast Asia, sign a declaration on climate change and discuss food security, disaster management, bio-energy and economic integration. The group aims to set up an economic community by 2015.