Hurricane Rick threatens the residents of Mexican and American resorts. 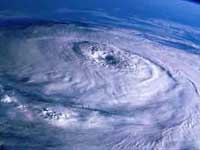 The U.S. National Hurricane Center said additional weakening is forecast during the next two days but Rick still is expected to be a dangerous hurricane as it approaches Baja California.

The center said a hurricane watch may be required for parts of the peninsula early on Monday and it was expected to hit Baja California resorts by mid-week.

Rick is the seventh hurricane of the eastern north Pacific season. Pacific storms pose no threat to Mexico's large oil industry in the Gulf of Mexico but the Baja California peninsula is popular with U.S. tourists for its resorts in the Los Cabos area.

The hurricane name "Rick"  is used on the six-year lists in the Eastern Pacific:

1997's Hurricane Rick - Weak Category 2 that made landfall in Mexico, doing minimal damage, despite making landfall in the same area as Hurricane Pauline had earlier in the year.

2009's Hurricane Rick - Powerful Category 4, the first in the Eastern Pacific since 2002's Kenna, and the second most intense storm recorded in the basin with 180 mph winds and a pressure of 906 mbar, behind 1997's Linda.