Wednesday Stanford and Lucile Packard Children's hospitals announced plans Wednesday to bar children under the age of 16 from visiting patients, including family members, starting Monday. This decision were made in order to reduce the spread of the swine flu virus. The policy will remain in effect throughout the flu season, which usually lasts into spring. 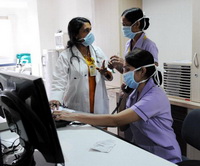 Stanford Hospital officials said they restricted visitations at their hospitals because children are more likely to get swine flu and they can be infectious for longer periods of time, even after symptoms are gone.

"Our flu season is early, but it has not been catastrophic. This is really a proactive measure, not only for our patients but for our staff, to decrease amount of exposure," said Nancy Lee, Stanford Hospital's vice president for patient care services and chief nursing officer, San Francisco Chronicle reports.

In the meantime, in Chicago Cook County authorities are still seeking doctors and other health workers to help vaccinate people against swine flu.

The county public health department put out a call for volunteers last month; so far 173 have registered. They will staff suburban county-run school-based clinics where mass vaccinations will be offered.

Swine flu vaccinations also will be available at county clinics, along with regular doctor offices and some retail pharmacies, Chicago Tribune reports.

Meanwhile in New York, State Health Commissioner Richard Daines has mandated that workers who have contact with patients be vaccinated for seasonal flu and the H1N1 variety, also called swine flu, or face losing their jobs.

Upstate New York nurse Sue Field objected to the mandate, saying that only the state legislature has the power to enact such a mandate and that the mandate is too narrow, since it allows an exception only for medical reasons.

New York is the only state mandating the vaccines.

Several members of the New York State Nurses Association, which backs Field's legal action, attended the hearing and held signs in support of her outside the courthouse.

"The recently adopted emergency regulation ... has serious flaws that warrant its withdrawal," the group said in a statement on its Web site, CNN reports.