Thursday Barack Obama makes his first visit as president to New Orleans to reassure residents of his commitment to the city's recovery four years after the Bush administration's botched response to Hurricane Katrina. 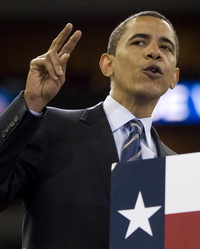 Flying in for a close-up look at the rebuilding process, Obama will see signs of progress but also stark reminders of how much more remains to be done to get New Orleans, once a thriving tourist city, back in full swing.

Obama's predecessor George W. Bush was widely criticized for the federal government's slow emergency response to Katrina, which hastened a slide in Bush's popularity and left a stain on his presidential legacy.

Soon after taking office in January, Obama vowed to prevent a repeat of the previous administration's "failures" and to do more to help New Orleans and the rest of the battered U.S. Gulf Coast rebuild, Reuters reports.

In the meantime, some residents have criticized Obama for the brevity of his trip — he's expected to be in the city just a few hours — and those in Mississippi, which took a direct hit from Katrina, were miffed the president left them out of his visit altogether.

"I'm greatly disappointed he's not coming to Mississippi," said Tommy Longo, mayor of Waveland, Miss., a town where almost every standing structure was destroyed or damaged. "There was no city hit harder than Waveland."

"From transitioning people out of temporary disaster housing to rebuilding schools, roads and bridges, the Obama administration has invested critical resources in Mississippi's rebuilding and recovery efforts and has worked to change the game on the ground for residents," he said, The Associated Press reports.

CNN quoted Nicholas Shapiro, White House spokesman, as saying, "The president made a promise to come to New Orleans and wanted to fulfill that promise as soon as his schedule allowed."

Shapiro said the administration is committed to helping Gulf Coast residents, and has ensured financial assistance to the area.