Wednesday Armenian President Serzh Sargsyan came to the western Turkish city of Bursa to attend a Turkey-Armenia World Cup qualifier as part of the two countries' move to normalize ties after nearly a century of rift. 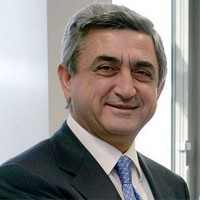 Police have tightened security in the city, where the football match will be played on Wednesday evening.

Turkish President Abdullah Gul travelled to Armenian capital Yerevan in September 2008 to watch a 2010 FIFA World Cup qualifier match between the two countries upon an invitation by Sargsyan on a landmark visit, Xinhua reports.

It was also reported, the round of "football diplomacy," comes just days after the two governments signed a historic series of protocols to establish diplomatic relations between the two neighbors.

"This is going to be the biggest change in the South Caucasus since 1994," said Gevorg Tel-Gabrielyan, the Armenia country director for the Eurasia Partnership Foundation.

The soccer game -- a World Cup qualifier -- is being held in Bursa, which centuries ago was the capital of the Ottoman Empire. Thousands of police are being deployed to maintain strict security.

BBC News quoted Ozan Kemal, one of the Turkish supporters, as saying, "I think this peace agreement will see more cooperation between Turkey and Armenia and a better future for the two countries.

Turks and Armenians haven't had any communication in the past and this has been the problem.

Once you start to get to know each other you'll see that you are quite similar.

Armenians have a lot of psychological trauma over the past, going back to 1915.

But if both countries re-establish ties we will see that we are not all bad," BBC News reports.