Tuesday speaking to an American interviewer, Afghan President Hamid Karzai says he would welcome more American troops in his country. 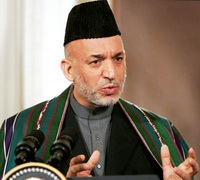 Mr. Karzai said he is aware of reports that the top U.S. and NATO commander in Afghanistan, General Stanley McChrystal, will seek up to 40,000 additional troops to fight an increased Taliban insurgency.

The Afghan president declined to indicate how many international troops he thinks are needed. Such decisions are best left to professionals, he said, adding that his main concern is protecting the Afghan people and defeating terrorism, Voice of America reports.

Meanwhile, Japan has announced it will end its naval refueling mission that supports the U.S.-led military operation in Afghanistan.

Defense Minister Toshimi Kitazawa said Tuesday Tokyo would pull out its naval ships from the Indian Ocean operation when their current mandate expires in January.

It was also reported, Mr. Karzai has assailed the waste of aid money by foreign organizations and killing of civilians in airstrikes. Both points have resonated. Secretary of State Hillary Rodham Clinton pledged to cut reliance on contractors; General McChrystal issued orders to protect noncombatants.

The United States should seize the opportunity to pressure a weakened Mr. Karzai to cut ties to warlords and scrutinize government appointees, said Karin von Hippel, director of the post-conflict reconstruction program at the Center for Strategic and International Studies in Washington.

“He’s hearing the debate in Washington, and I’m sure he’s nervous,” she said. “He needs us to be there. They need to make a lot of changes, but so do we,” The New York Times reports.