Nuclear Talks in Geneva: "Agreement i n Principle" Is Achieved

Monday Iranian officials said the country would head into the next round of talks with six world powers on the Islamic republic's controversial nuclear programme later this month with a "positive" approach. 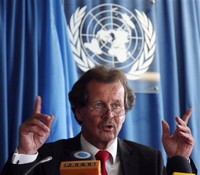 Nuclear Talks in Geneva: "Agreement i n Principle" Is Achieved

Foreign ministry spokesman Hassan Ghashghavi also said that the head of the UN atomic watchdog Muhamed ElBaradei had been full of praise for Iran's cooperation during his weekend visit to Tehran.

Ghashghavi reiterated at a news conference that the Iranian nuclear programme was peaceful in purpose, and dismissed Western demands that Tehran offer guarantees to this effect.

Iran and Britain, China, France, Germany, Russia and the United States are to meet again by the end of October for more discussions on Tehran's nuclear programme after talks last week in Geneva, the first in 15 months.

Ghashghavi said he was not in a position to make a "judgment" about how the late October round of talks would proceed, but he said that Tehran "was going forward with this positive approach," AFP reports.

In the meantime, diplomacy's three slipperiest words are "agreement in principle." Iran's Ambassador to Britain exclaimed after the talks in Geneva, "No, no!" when asked if his country had agreed to ship LEU to Russia; it had "not been discussed yet." An unnamed Iranian official said that the Geneva deal "is just based on principles. We have not agreed on any amount or any numbers." Bargaining over the deal's specifics could stretch out indefinitely.

Other issues include whether Iran will have "observers" at Russian enrichment facilities. If so, what new technologies might those observers glean? And another question is, since Tehran's reactor is purportedly for medical purposes, whether Mr. Obama will deny what Iran pretends to need to refuel it in 2010, The Wall Street Journal reports.

The New York Times quoted Ms. Rice as saying on NBC's "Meet the Press" that it was now up to Iran to "prove to our satisfaction that their program is, as they claim, for peaceful purposes and open up their facilities to inspections, freeze their uranium enrichment program, commit, as they have done, and follow through on that commitment to provide fuel for enrichment outside of the country or face real pressure and consequences."

She declined to be specific about those consequences, but appeared to be referring to American and European plans to move to harsh sanctions if Iran fails to open up.

Ms. Rice sidestepped questions about the I.A.E.A. report. "I'm not in a position to characterize that report or our own intelligence," she said.

Lawmakers in both parties agreed that the new I.A.E.A. report added to their concerns about Iran. Senator Lindsey Graham, Republican of South Carolina, speaking on "Fox News Sunday," said that in light of the report, the United States should continue to push for inspections. "One of the things that we'd want to do is challenge the Iranians to give us some access to what's alleged in this report," Mr. Graham said. "Clearly, they're not developing a nuclear program for peaceable purposes," The New York Times reports.