Ireland from the Second Time has Voted for the Lisbon Treaty 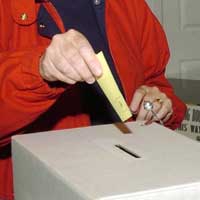 Ireland from the Second Time has Voted for the Lisbon Treaty

While vote counting continues, Micheal Martin called the result of the nation's second referendum on the treaty "a convincing win" that is good for Ireland.

Official results are expected later Saturday. The treaty aims to strengthen the EU's foreign policy and streamline its decision-making.

All Ireland’s major parties, apart from Sinn Fein, support for the treaty, with prime minister Brian Cowen, warning rejecting it again would lead to the country being economically sidelined.

Opponents claim the treaty will undermine Irish sovereignty by handing over more power to the federalist government of the EU, Times Online informs.

Ireland is the only EU country constitutionally obliged to put the treaty to a referendum. Of the 27 EU states, Poland and the Czech Republic are the only others yet to ratify it.

Dublin agreed to hold another poll after securing guarantees on key policy areas which it felt were behind last year's rejection, such as its military neutrality, abortion and tax laws, APF informs.