Friday Palestinian diplomats said a United Nations report on war crimes in Gaza would "remains alive" though the U.N. Human Rights Council's made a decision to delay a vote on whether to pass it to the General Assembly for further action. 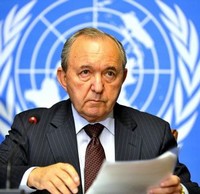 The investigation led by former South African judge Richard Goldstone concluded that both Israel and Palestinian militants committed war crimes and possible crimes against humanity during their Dec. 27-Jan. 18 conflict in Gaza.

The 47-nation rights council had been expected to pass a resolution this week that could have brought Israeli officials one step closer to prosecution at the International Criminal Court in The Hague. It decided instead to delay a decision until March, after what officials described as "intense diplomacy" from the United States.

Palestinian deputy ambassador Imad Zuhairi said Friday that the deferral was a result of his government's desire to build broad international support for action next year, The Associated Press reports.

It was also reported, in his report Goldstone was particularly critical of Israel, both for its conduct of the war and its continued occupation of Palestinian territory.

Israel had strongly rejected the findings of the Goldstone report as biased, even though it also criticised the actions of Hamas.

The US administration said it had "very serious concerns" about Goldstone's recommendations, which included a call for the UN security council to investigate and raised the possibility of investigation by the international criminal court and judges from individual countries.

The Palestinians do not have a seat on the 47-member human rights council, but Arab and Muslim nations with council seats had been expected to push for the report to be endorsed.

The Palestinian reversal came after "intense diplomacy" by Washington, which told the Palestinians that going ahead with the vote would harm efforts to restart peace negotaitions with Israel, according to diplomats quoted by news agencies, guardian.co.uk reports.

News agencies also report, a diplomatic source said the move had followed intense lobbying by the United States, which is seeking to restart peace negotiations in the Middle East. "There is agreement to defer given immense pressure from the United States," he told Reuters.

Earlier, Palestinian ambassador Ibrahim Khraishi said his delegation would not give up what he called the "legal track," and planned to pursue the issue at the rights council in March.

"It will be deferred for the coming session, giving more time to all the parties, Israelis and Palestinians, to discuss a very important and historic report," Khraishi told Reuters.

"We insist that the legal track is helping the political one," Reuters reports.