Tuesday ousted President Manuel Zelaya said he was analyzing a proposal from Honduran business leaders that want to bring him back to power and end the country's crisis. Zelaya said he found the plan encouraging. 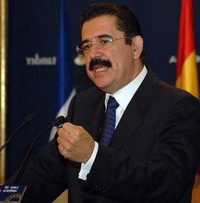 The leader of the influential National Industry Chamber has proposed that 3,000 U.N. peacekeepers or troops from conservative-governed countries be sent to Honduras to ensure that if Zelaya is restored to the presidency, he respects an international mediator's proposal that his powers be strictly limited.

The floating of the plan over the weekend was the strongest sign yet that business leaders who have staunchly backed the June 28 coup could be open to reinstating Zelaya. The idea surfaced days after Zelaya sneaked back into Honduras from exile and took refuge in the Brazilian Embassy, a move that has increasingly put the interim government on the defensive.

Zelaya said it was "good sign" that "conservative sectors of the country are analyzing a proposal" that includes his resumption of the presidency, The Associated Press reports.

It was also reported, U.S. Ambassador to Honduras Hugo Llorens and the diplomat representing the Organization of American States, John Biehl, got an earful from Honduran business leaders and senior politicians. And they gave back some of what they got, according to several participants.

But two significant themes emerged from the secret session at Llorens' residence on Sunday, themes that have the potential to finally ease the deepening political crisis that has divided and isolated Honduras and vexed Washington and other regional powers:

Key backers of the coup that ousted President Manuel Zelaya three months ago have begun to temper their support for the de facto government they helped to install. And some even mention a concession until now taboo. They might agree to allow Zelaya to be reinstated and finish his term due to expire in January, The Los Angeles Times reports.

In the meantime, the unofficial radio station of ousted Honduran President Manuel Zelaya resumed broadcasting via the Internet on Monday, a day after the country's caretaker government shuttered it by force.

The de facto government issued a Sunday decree suspending media freedom and some civil liberties and sent troops on Monday to shut down Radio Globo and a television station that backed Zelaya, ousted in a coup three months ago.

The outside world, including U.N. Secretary-General Ban Ki-moon, and even local media loyal to de facto leader Roberto Micheletti have condemned the closures of Radio Globo and TV station Cholusat Sur, or channel 36.

On Tuesday, Radio Globo DJs played "resistance" music and took calls by mobile phone from a cramped peach-colored bedroom in a safe house at the end of a narrow residential alley, Reuters reports.