According to U.N. Secretary-General Ban Ki-moon, he said Iran that a package of incentives from six key Western powers that is now on the table if Tehran suspends uranium enrichment is a good one and Iran should negotiate on it. 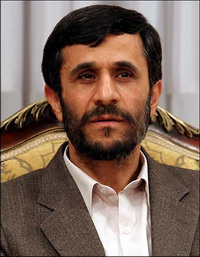 With Iran scheduled to meet Thursday in Geneva with the six key Western nations — the United States, Russia, China, Britain, France and Germany — the secretary-general said he told Mottaki "to make progress" in negotiations on his country's nuclear program.

The Geneva meeting comes days after the International Atomic Energy Agency, the U.N. nuclear watchdog, confirmed that Iran sent a letter on Sept. 21 disclosing that it was building a new uranium enrichment facility, The Associated Press reports.

In the meantime, Israel has warned for years that it might carry out military action to prevent Iran from building an atomic bomb. But as the United States and other powers prepare to confront Iran in talks this week, the message from Jerusalem is more restrained.

Israeli leaders say they are willing to wait as President Obama plays out his strategy of negotiating with Iran while threatening stronger sanctions if talks fail. They say last week's disclosure of a previously secret uranium enrichment plant under construction in Iran strengthened the case for harsh international measures.

And though they remain skeptical that anything short of force will derail Iran's nuclear plans, the Israelis are careful to emphasize that attacking its reactors and missile sites is an option the Obama administration, not just Israel, holds in reserve.

"The foundations have been laid for halting Iran by establishing a broad international coalition led by the United States," Deputy Foreign Minister Danny Ayalon said this week. "The tools the United States has at its disposal are much stronger, much more serious," The Los Angeles Times reports.

It was also reported, Tuesday Iran boldly reasserted its right to build nuclear installations, while fissures appeared in the coalition of nations seeking to steer the country's leadership away from its nuclear ambitions.

Iran held fast to its hard-line position in the wake of revelations of a new underground nuclear site, but also offered a conciliatory gesture by saying it would set a timetable "soon" to admit international inspectors to the facility, near the holy city of Qom.

The split image of confrontation and vague cooperation injected an added sense of drama to Thursday's nuclear talks in Geneva, leaving diplomats uncertain whether Iran will negotiate seriously with the United States, Russia, China, Britain, France and Germany.

U.S. and allied officials maintain that Tehran's ultimate aim is to build nuclear weapons, but Iran says its nuclear program is strictly for civilian energy purposes. Its chief energy director said Tuesday that developing atomic weapons would be "against our religion." But Ali Akbar Salehi, director of the Atomic Energy Organization of Iran, also told reporters that "the new site is part of our rights and there is no need to discuss it," The Los Angeles Times reports.