Oktoberfest: Terrorists Are Not Allowed

Munich police restricted car traffic at the Oktoberfest and detained two Islamic extremists after al-Qaeda threats against Germany suggested the world’s largest beer festival may be a terror target. 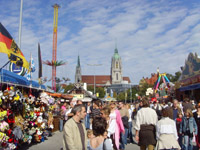 Oktoberfest: Terrorists Are Not Allowed

The detainees have links to Abu Talha, an al-Qaeda spokesman who urged Germans in a video before yesterday’s election to vote for pulling German troops out of Afghanistan, Munich police spokesman Peter Reichl said by phone today.

Al-Qaeda released videos threatening Germany before the election, prompting tighter security at airports and train stations and a flight ban over the Oktoberfest, which draws an average 375,000 people a day. The 16-day festival of beer, sausages and lederhosen ends Oct. 4.

Abu Talha, also known as Bekay Harrach, knows one of the detainees and had contacts with the other through a third person, Reichl said. They were detained in Munich on the weekend and will be held until the Oktoberfest ends, he said.

Munich police overnight put up roadblocks at the festival, a combination of beer tents and outdoor tables that fills a fairground in downtown Munich. Parking is banned around the perimeter, while car traffic is limited to local residents and deliveries, Reichl said. All cars are being stopped for searches, leading to traffic backups.

The two detained men aren’t charged with a crime and are being held temporarily under a judge’s order. “We know these persons are part of Islamic extremist circles,” Reichl said.

German officials have received no explicit threat against the Oktoberfest, he said. In a Sept. 18 video, Harrach spoke in German and urged Muslims to stay away from vital services for two weeks after the election “if the German people don’t decide in favor of a withdrawal from Afghanistan.”

Chancellor Angela Merkel, a Christian Democrat, won re- election yesterday and plans to govern with the Free Democrats. Both parties support the mission in Afghanistan, where about 4,200 German troops serve in the International Security Assistance Force.

A pipe-bomb explosion killed 13 people and wounded more than 200 at the 1980 Oktoberfest, nine days before elections in then West Germany. Prosecutors linked bomber Gundolf Koehler, 21, to a German right-wing extremist group, according to Bloomberg's report.