China May Hamper Western Efforts to Increase Pressure on Tehran

China has long said it sticks to a doctrine of "non interference" in the affairs of other nations, partly because it does not want the United States or Europe criticising its behaviour or policies. 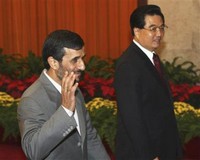 China May Hamper Western Efforts to Increase Pressure on Tehran

China is a permanent member of the Security Council, so it has a veto on any potential resolution to censure Iran or ratchet up sanctions. While Beijing often abstains from votes on decisions it disapproves of, it is also willing to use its veto.

Besides, growing energy ties bind China, the world's No. 2 crude oil consumer, and Iran, which has the world's second-largest crude oil reserves but desperately needs investment to develop them, Reuters reports.

It was also reported, China's distaste for sanctions and appetite for Iran's oil may hamper Western efforts to ramp up pressure on Tehran after disclosure of the country's second uranium enrichment plant.

China may be persuaded to back some sanctions, especially if Russia joins U.S. and European calls for action, experts say.

But Beijing is likely to flex its power as a permanent member of the U.N. Security Council to dilute any proposed resolution that could threaten its ties with Tehran , Reuters reports.

In the meantime, Russia is urging restraint from the international community after a series of Iranian missile launches, a Foreign Ministry source told Interfax news agency on Monday.

The missile drills of the elite Revolutionary Guards coincide with escalating tension in Iran's nuclear dispute with the West, after last week's disclosure by Tehran that it is building a second uranium enrichment plant.

"We should not give way to emotions now," the Russian foreign ministry source said. "We should try to calm down and the main thing is to launch a productive negotiations process (with Iran)."

European Foreign Policy Chief Javier Solana said on Monday he was concerned after Iran test-fired a missile which defense analysts have said could hit Israel and U.S. bases in the Gulf, Reuters reports.