Iran tested its longest-range missiles Monday, capping two days of war games meant to show the country is ready for any military threat at a time when it is under intense international pressure to fully disclose its nuclear activities. 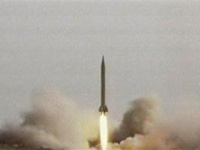 State television said the powerful Revolutionary Guard, which controls Iran's missile program, successfully tested upgraded versions of the medium-range Shahab-3 and Sajjil missiles. Both can carry warheads and reach up to 1,200 miles (2,000 kilometers), putting Israel, U.S. military bases in the Middle East, and parts of Europe within striking distance.

"Iranian missiles are able to target any place that threatens Iran," said Abdollah Araqi, a top Revolutionary Guard commander, according to the semi-official Fars news agency.

The missile tests began Sunday, two days after the U.S. and its allies disclosed that Iran had been secretly developing an underground uranium enrichment facility and warned the country it must open the site to international inspection or face harsher international sanctions.

Iran's Foreign Ministry spokesman Hasan Qashqavi said the missile tests had nothing to do with the tension over the site, saying it was part of routine, long-planned military exercises.

The newly revealed nuclear site has given greater urgency to a key meeting on Thursday in Geneva between Iran and six major powers trying to stop its suspected nuclear weapons program.

Alex Vatanka, a senior Middle East analyst at IHS Jane's, said Tehran was conducting missile tests now "to show some muscle, show some strength, and say the game is not over for Iran yet." He noted the upcoming meeting in Geneva.

"They felt going into these meetings ... that they needed to have something else to bolster their position, and I think that Iran's Revolutionary Guard showing a bit of military muscle here is part of that," he said.

U.S. Secretary of State Hillary Clinton said she doesn't believe Iran can convince the U.S. and other world powers at the upcoming meeting that its nuclear program is for peaceful purposes, as Tehran has long claimed. That puts Tehran on a course for tougher economic penalties beyond the current "leaky sanctions," she said.

The nuclear site is located in the arid mountains near the holy city of Qom and is believed to be inside a heavily guarded, underground facility belonging to the Revolutionary Guard, according to a document sent by President Barack Obama's administration to lawmakers.

Qashqavi, the Foreign Ministry spokesman, identified the site as Fordo, a village located 180 kilometers south of the capital Tehran. The site is 100 kilometers away from Natanz, Iran's known industrial-scale uranium enrichment plant.

After strong condemnations from the U.S. and its allies, Iran said Saturday it will allow U.N. nuclear inspectors to examine the site.

Israel has trumpeted the latest discoveries as proof of its long-held assertion that Iran is seeking nuclear weapons.

By U.S. estimates, Iran is one to five years away from having nuclear weapons capability, although U.S. intelligence also believes that Iranian leaders have not yet made the decision to build a weapon.

Iran also is developing ballistic missiles that could carry a nuclear warhead, but the administration said last week that it believes that effort has been slowed. That assessment paved the way for Obama's decision to shelve the Bush administration's plan for a missile shield in Europe, which was aimed at defending against Iranian ballistic missiles.

Iran's last known missile tests were in May when it fired its longest-range solid-fuel missile, Sajjil-2. Tehran said the two-stage surface-to-surface missile has a range of about 1,200 miles (1,900 kilometers) — capable of striking Israel, U.S. Mideast bases and southeastern Europe. Reported by the Associated Press.