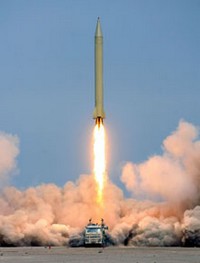 Monday Iranian television broadcast images of a surface-to-surface missile blasting off from desert terrain in a cloud of dust.

The elite Revolutionary Guard launched the solid fuel-powered missiles on the second day of military exercises designed to show off the Islamic Republic's defense capabilities.

The war games and the revelation that Iran is building a second uranium enrichment plant have added a sense of urgency to this week's international talks on Tehran's nuclear program, Voice of America reports.

It was also reported, the tests come amid heightened tension with the big international powers over Iran's nuclear ambitions.

Last week, Iran disclosed it was building a second uranium enrichment plant, despite UN demands that it cease its enrichment activities.

Iran is due to hold crucial talks with the five UN Security Council members plus Germany on Thursday on a wide range of security issues, including its nuclear programme, BBC News reports.

In the meantime, President Barack Obama said on Sept. 26 he remains open to “a serious, meaningful dialogue” with Iran.

The UN’s International Atomic Energy Agency said that Iran confirmed the development of a second uranium enrichment facility in a Sept. 21 letter.

Uranium enrichment is at the center of Western concerns about Iran’s nuclear program. The process isolates a uranium isotope needed to generate fuel for a nuclear power reactor; in higher concentrations it can be used to make a bomb.

Iran denies it is developing a nuclear weapon and insists the enrichment is needed for civilian uses, such as the production of electricity.

Iranian officials rejected criticism for failing to mention the new enrichment plant’s existence previously, arguing that it’s only required to inform the IAEA 180 days before introducing nuclear material into the plant. President Mahmoud Ahmadinejad said the facility is “18 months away from operation,” Bloomberg reports