U.S. Military Focus to Shift to Pakistan and Al Qaeda

According to a published report, President Barack Obama is going to shift the focus of military efforts in Afghanistan from confronting the Taliban with more U.S. forces to concentrating on Al Qaeda both there and in Pakistan. 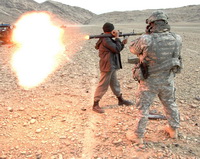 U.S. Military Focus to Shift to Pakistan and Al Qaeda

That plan, put together by Vice President Joe Biden, would put emphasis on rooting out Al Qaeda from strongholds along the Pakistan border using Predator drone strikes, special forces and other tactics, The New York Times reported on Tuesday, citing unnamed U.S. sources.

While the focus would shift to Pakistan, U.S. forces would accelerate training of Afghan troops to take on the Taliban. Biden has said previously he believes Pakistan is the main threat to American interests, but Obama rejected his approach in the spring.

The plan is one of a range of options being reviewed in light of a pending request from Gen. Stanley McChrystal for an additional 30,000-40,000 troops and his dire assessment of the Afghan campaign, FOXNews reports.

It was also reported, the Pentagon is rebuffing congressional calls for the top U.S. commander in Afghanistan to personally make the case for the war, amid the growing political tumult over the Obama administration's handling of the conflict.

An array of powerful lawmakers from both parties, including the Democratic chairman of the House Armed Services Committee, want Gen. Stanley McChrystal to testify about the challenges confronting the U.S. and its allies in Afghanistan and his plan for beating back the resurgent Taliban.

The calls to testify come as the Pentagon has asked Gen. McChrystal to delay his request for more troops while the administration rethinks strategy in the wake of last month's Afghan elections, which have been racked by allegations of fraud.

It also comes as public support for the war is waning badly. In a NBC-Wall Street Journal poll conducted between last Thursday and Sunday, 59% of respondents said they were now "less confident" that the war would come to a successful conclusion. Just over half of those polled said they opposed adding more U.S. troops in the country, while more than a third favored an immediate withdrawal.

Democrats and Republicans in Congress note that the Bush administration made Gen. David Petraeus, the former top U.S. commander in Baghdad, available for days of high-profile hearings on the conduct of the war in 2007, as a similar debate was raging over troop levels in that war, The Wall Street Journal reports.

Administration officials maintained they were looking at all options to protect the U.S. and its allies by shutting down al-Qaida leaders who are believed to be hiding in areas of Pakistan bordering Afghanistan.

Critics at the Pentagon and on Capitol Hill said the White House was in danger of taking its eye off the fight that has turned increasingly deadly for American forces in recent months. They called on Obama to fulfill an anticipated request for more troops from the top U.S. commander in Afghanistan, Army Gen. Stanley McChrystal.

"This leads me to urge you to waste no time in providing a clear direction to our commanders and civilian leaders, along with the resources necessary to achieve their mission," House Armed Services Chairman Ike Skelton, D-Mo., wrote to Obama in a letter dated Tuesday. Skelton is the highest-ranking Democrat so far to support sending more troops to Afghanistan, The Associated Press reports.