Brazil's government has asked the United Nations Security Council to convene an emergency meeting over a siege in Honduras with the nation's unseated president taking refuge in the Brazilian Embassy. 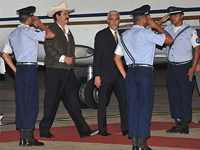 On September 21, 2009, Zelaya and his wife arrived at the Brazillian embassy in Tegucigalpa. Zelaya stated that to reach the embassy he travelled through mountains for fifteen hours, and took back roads to avoid checkpoints. Zelaya refused to state from which country he entered Honduras. Thousands of Zelaya's supporters surrounded the Brazillian embassy chanting, "Yes we could! Yes we could!"

Michelleti initially denied Zelaya had returned, but later admitted Zelaya's return, stating that it "changes nothing of our reality." Michelleti later issued a curfew and asked the Brazillian government to put Zelaya in Honduran custody to be put on trial. Brazillian foreign minister Celso Amorim stated that Brazil did not aid Zelaya's return. Security Vice Minister Mario Perdomo ordered checkpoints to be placed on highways leading to Tegucigalpa, to "stop those people coming to start trouble." Defense Minister Lionel Sevilla suspended all air flights to Tegucigalpa.

Costa Rican President Oscar Arias and U.S. Secretary of State Hillary Clinton urged both sides to begin a dialogue toward a peaceful solution.

Eulogio Chavez, leader of a 60,000-member teachers union, announced that his organization would go on strike to back Zelaya.

Viotti sent a letter asking for the council meeting after baton-wielding soldiers used tear gas and water cannons Tuesday to chase away thousands of Zelaya's supporters who were demonstrating outside the embassy.

Zelaya and 70 friends and relatives are trapped inside.