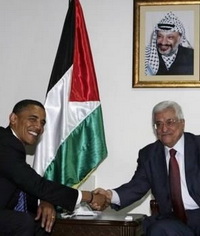 In a statement to the press at the opening of the tripartite meeting, the US president stressed that

"despite all the obstacles, and history," Washington is believes "permanent status negotiations must begin, and begin soon."

Obama reiterated that "the United States is committed to a just lasting and comprehensive peace in the Middle east, which will result in two states living side by side - Palestine and Israel," adding that "it remains important for the Arab states to take steps to promote peace in the region," Jerusalem Post reports.

In thje meantime, President Abbas's popularity among Palestinians had risen significantly in recent months, potentially giving him more clout as a negotiator. But scathing criticism from Hamas over his agreement to meet Mr. Netanyahu on the sidelines of the United Nations General Assembly in New York could eat into those gains.

In a statement sent to reporters in Gaza, Hamas said it was "truly shocked" that Mr. Abbas accepted President Barack Obama's invitation for the talks, given that Abbas has insisted for months that he would not meet Netanyahu without a freeze on settlement expansion in the West Bank.

"This means that Abbas has yielded to Israel and the US and retreats from his stance," said Hamas, calling Abbas' decision "a submission to the Zionists." The Islamic movement, which has controlled the Gaza Strip for over two years, called on Abbas "to immediately stop his political rush and stop yielding to Zionist dictations," adding that he should first achieve Palestinian unity.

A Palestinian reconciliation deal to bring Hamas and Fatah together has remained elusive and Abbas is taking a risk by agreeing to a high-profile summit in the absence of the settlement freeze sought by Obama since his June 4 policy speech in Cairo. The Washington Times on Tuesday reported that the Israelis had offered a temporary freeze for six to nine months that would exclude 2,500 units already approved for construction, but such a deal has not been made public and could not immediately be verified, Christian Science Monitor reports.

It was also reported, Samir Qatami, a Jordanian journalist, pointed out that Obama's inability to pressure Israel has been clear ever since Washington sharply criticised the UN investigation into war crimes in Gaza last year.

"This investigation could have been used as a tool to pressure Israel if there had been a true US will to solve the Palestinian issue."

Muhammad al-Rasa'i in an editorial in al-Ra'y argued the talks will mean nothing unless physical change follows swiftly.

"The magic in Obama's speeches has started to fade, everybody is now waiting for actions on the ground," Aljazeera.net reports.