Obama to Resume Peace Talks between Israel and Palestinians

Benjamin Netanyahu, Israeli Prime Minister, won't bend on his opposition to a settlement freeze during his meeting the American and Palestinian leaders in New York. 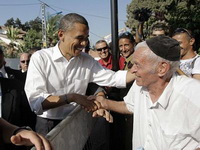 Obama to Resume Peace Talks between Israel and Palestinians

The tough Israeli line could signal trouble for Tuesday's summit, where President Barack Obama is bringing together Netanyahu and Palestinian President Mahmoud Abbas in hopes of relaunching peace talks.

Israeli and Palestinian officials, feuding over the ongoing settlement construction in West Bank, have warned that no breakthroughs are expected.

Abbas has refused to resume negotiations without an Israeli commitment to freeze construction in the West Bank, a call echoed by the U.S. administration. The Palestinians say the meeting does not constitute negotiations.

Netanyahu's media adviser, Nir Hefetz, said the prime minister would hold firm to his opposition to a settlement freeze, The Associated Press reports.

It was also reported, Netanyahu, on the one hand, faces considerable opposition from his traditionally hawkish coalition partners to any significant moves forward with the Palestinians, said Ely Karmon, a senior researcher at the Interdisciplinary Center in Herzliya, Israel.

On the other, nor can Abbas make real progress down the road to compromises and peace while his Fatah movement is still locking horns with Hamas, Karmon added.

Although being the leading Palestinian voice on the international stage, Fatah dominates only in the West Bank, with Hamas controlling the Palestinian enclave of the Gaza Strip. The two sects of Palestinian territories are now separated by Israel

"Without a solution to the problem in Gaza, the negotiations can't continue in earnest with the Palestinian National Authority (PNA), because the PNA simply doesn't control Gaza," said Karmon.

Meanwhile, the Palestinian side, which suspended the peace talks in protest against Israel's massive operation in Gaza eight months ago, has been accusing Israel of not being genuinely peace-oriented and insisting that Israel is to blame for the stalemate, Xinhua reports.

In the meantime, Obama’s administration is looking to continue making progress toward a resumption of peace talks between Israel and the Palestinians.

However, Gibbs noted that "we have no grand expectations" for the upcoming summit meetings between Obama, Netanyahu and Abbas.

Obama will first have separate meetings with Netanyahu and Abbas before holding a tripartite talks ahead of the United Nations General Assembly in New York, Gibbs said Saturday.

The upcoming talks between Obama and Netanyahu and Abbas is believed to a new effort by the Obama administration to push forward long-stalled Middle East peace process.

U.S. special envoy to the Middle East George Mitchell visited Jerusalem and Ramallah early this week, which witnessed no agreement among the U.S., Israel and the Palestinian officials, Xinhua reports.